Mr. Martin graduated with a Bachelor of Science Degree in Education in 1985 from Delta State University. He received his Master’s Degree in Guidance and Counseling from Delta State University graduating with honors in 1988. While at Delta State, Mr. Martin was a Varsity Basketball Player and later a Graduate Assistant Basketball Coach, inducted into the Delta State University Hall of Fame, inducted into Who’s Who in American Colleges and Universities, and served as Vice President of the Student Government Association. After college Mr. Martin then went on to work nearly 27 years in Corrections, retiring in 2016 as Correctional Program Specialist from the Federal Bureau of Prisons. Mr. Martin is an avid sports fan and works part-time as event security for the Orlando Magic, Orlando Solar Bears, Camping World Stadium, and at other Orlando sporting events. After being assigned to work security at Morning Star, Mr. Martin joined the Morning Star Family in 2017 as a Job Coach/Teacher. He loves Morning Star because he loves the kids. He often talks about the joy he sees in the children after teaching them to do something they never believed they could do before. 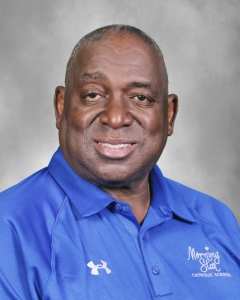